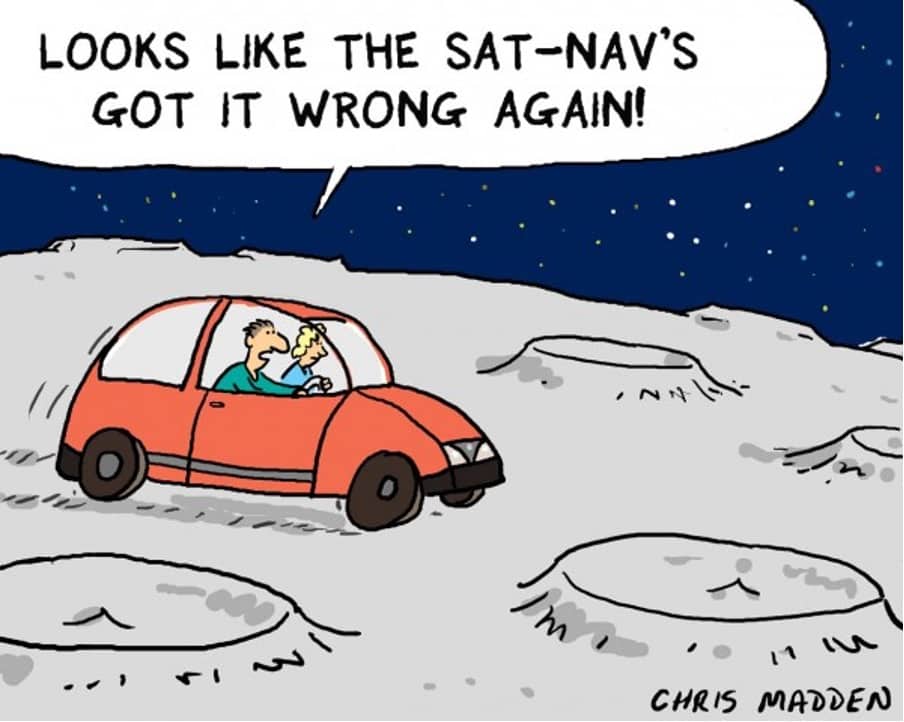 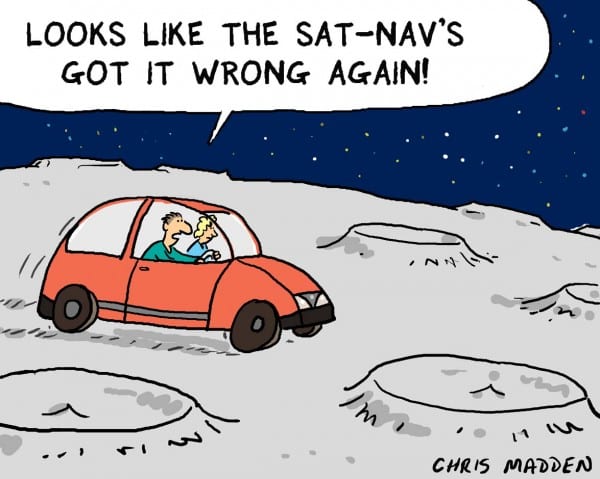 The rise of price automation software solves a classic problem. In the mid-noughties, there was a proliferation of cartoons (such as the one above) depicting a car submerged in a lake or flying off a cliff because the driver had followed the satellite navigation system’s directions blindly without applying their own intuition or knowledge. Although these cartoons were a tongue-in-cheek representation of the most extreme cases, they did highlight the fact that on many occasions the suggested route was less than optimal and, as a result, sat navs were never fully trusted by drivers. Fast forward 15 years and these cartoons seem like a quaint relic from a bygone age. These days we hardly pause, even for the most well-travelled journeys, before punching our destination into the sat-nav. And once set we seldom deviate from the suggested route. Why is this? What has changed so profoundly that we trust their recommendations implicitly?

The early satellite navigation systems used static data to determine the optimal route between point A and point B. Most of the time they got the initial journey correct (only occasionally leading you down a dead-end track) but once set the system would direct the driver along this path regardless of what lay ahead. No consideration was given to the conditions at the start of or during the journey. In this respect, it was no more than a digital map that gave the driver an indication of the best path and then left them to use their judgment and experience to course-correct if any obstacles (such as traffic jams, road closures, and diversions) were encountered along the way. Even if the driver had traveled the route a hundred times, what lay round the next bend could never be anticipated, and the best-laid plans could quickly be derailed.

The Revenue Management metaphor: from old school to modern nav systems – depending on a broad variety of data sources

By contrast, the best modern sat nav systems present a huge amount of up-to-the-minute information, real-time turn-by-turn directions, and much more. They achieve this by collecting data from a variety of sources in real time and use it to tailor each trip with the most efficient, obstacle-free route. Much of the data is generated by users alerting fellow drivers to accidents, hazards, road closures, speed traps, police activity, and other issues that may call for a change of route complete with an ETA based on the current traffic conditions.

This is the lesson for the revenue management community. Setting pricing based on historical trends and knowledge of the market is like setting off on a journey using a map or old school GPS. This approach works sufficiently well when the conditions ahead are stable, devoid of diversions and obstacles, but even before COVID times, market predictability was never guaranteed.

How to navigate unpredicted demand bursts: the Ed Sheeran example

A few years ago, a hotel client of mine in Glasgow was caught out when Ed Sheeran announced an extra concert due to the overwhelming response to the pre-scheduled show. Unfortunately, the new date was announced on a Saturday when their revenue manager was not at work. It was also scheduled for a Sunday, an historically low demand night for the hotel. The result of this was that the hotel, like most hotels in Glasgow, sold out in less than an hour and at a rate far below what the market was willing to pay. This hotel’s ADR that night was less than £50. Some of their competitors, who had fortuitously detected the surge, were achieving rates in excess of £200.

If this hotel had been ingesting and processing current demand data and optimizing their prices in real-time in response to changes in demand, they would have been among the lucky few to achieve an ADR of £200. Now, and for the foreseeable future, the road ahead will have many twists and turns that bear no resemblance to the road traveled before. We simply can’t afford to drive blind.

The changing role of historic data in tactical revenue management

This does not mean that historical data no longer has a role to play. On the contrary. historical data is an important and relevant factor for understanding booking behaviour and demand patterns – during normal circumstances. It is the cornerstone for demand modeling and forecasting and in sat nav terms this is the database of all the journeys previously traveled. Another important hotel data source is the real-time performance of future arrival dates and competitor-set rates. These data sets provide validation of assumed market conditions and are more relevant and reliable during turbulent times, but they only provide a snapshot of the current status. From a sat nav perspective this is equivalent to assessing the current conditions on all viable routes at the start of the journey and predicting the optimal one.

Missing from the picture is the future data, the powerful insights of traveller intent.  Future demand is always an important factor for revenue management but even more so now when the demand is completely off compared to what we are used to. By being able to detect this recovering demand – before it shows on the books – will enable the hotel to be more proactive and stay ahead of the competition. These insights are like the alerts provided by sat nav users that allow for course correction during every stage of the journey.

A good sat-nav, like an intelligent pricing engine, does real-time dynamic weight balancing of these data sources to ensure the optimal route (and price) for the current situation.

Events such as the Ed Sheeran concert in Glasgow may have impacted a handful of days in the past, but the frequency and scale of the surges meant that such potential revenue losses were isolated. Now the situation is much more critical. Given the unpredictable nature of demand, a hotel could find itself in a ruinous situation. This can be illustrated by the surge of bookings that followed the announcement by the British Prime Minister in February this year that hotels can fully open in mid-May. Hotels in local tourist hot spots were sold out for whole weeks, not just one or two days, immediately after the announcement. Any hotels that had not anticipated or had underestimated the scale of the demand no doubt found themselves booked out at a low rate across many weeks.

Intelligent pricing automation – now is the time to embrace it!

While these examples show the importance and benefit of real-time demand forecasting and the resultant real-time price optimisation there is still reticence within the hotel community to fully embrace intelligent pricing automation. The only reason for this hesitance is trust in the results. Atomize entered the revenue management space with a clear vision to automate tactical pricing with sophisticated AI. Fulfilment of this vision can only be achieved through confidence in our results. Over the past 12 months, in the most volatile environment, several Atomize customers have outperformed the market by running in full autopilot mode. This is the sat nav equivalent of defining your destination, selecting the suggested route and accepting automated course corrections along the way.

What was previously considered radical thinking suitable only for early adopters and mavericks is now deemed a prudent approach to recovery and beyond, and the shift from semi-automated to fully automated hotel revenue management is gathering pace.

DOWNLOAD the guide by submitting the form after the article below! Changing tech at a hotel, particularly the PMS, is often compared to performing open 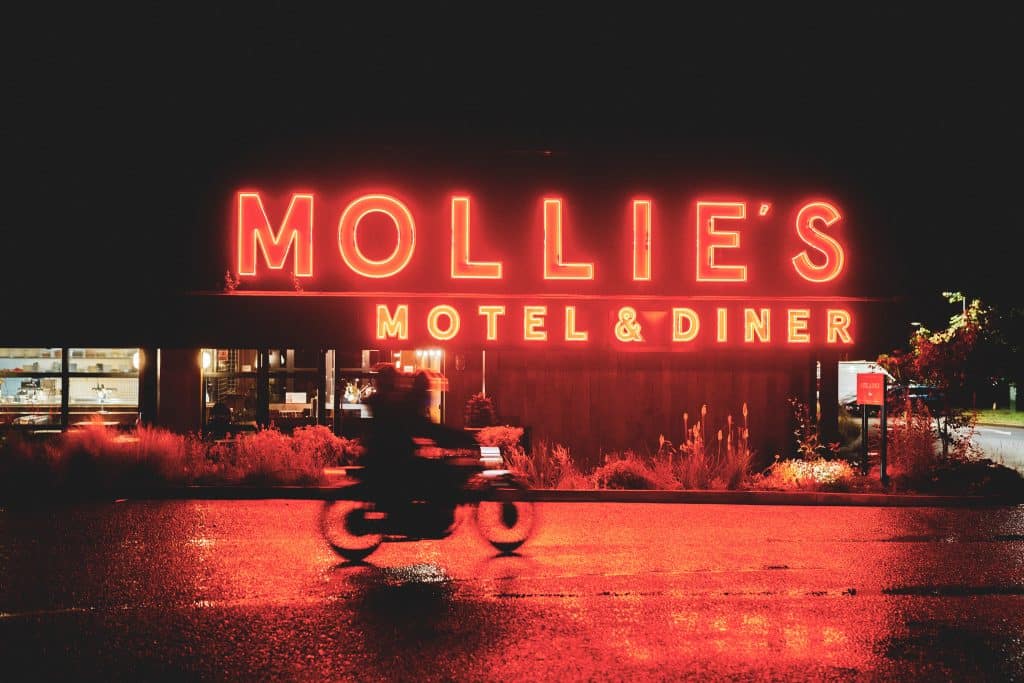 Mollie’s, the Soho House-designed motel and diner concept from the UK, recently implemented Atomize as their Revenue Management System (RMS). The innovative brand aims to

Guide: Leveraging the power of hotel technology – the ultimate combination of tools for successful revenue management

Guide: Leveraging the power of hotel technology – the ultimate combination of tools for successful revenue management